A Round-Up of This Week’s Top Stories: 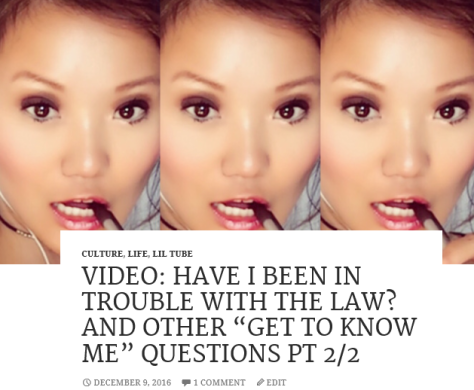 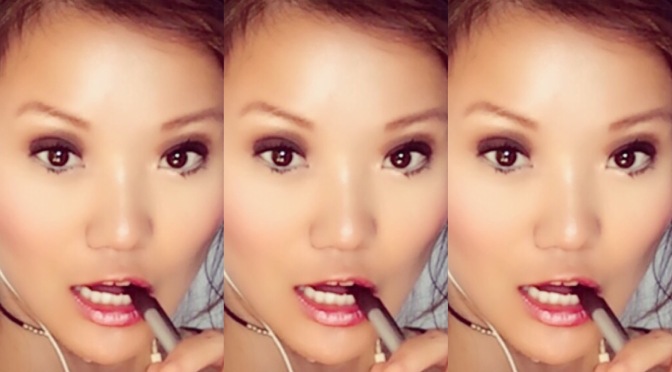 MY “GET TO KNOW ME QUESTIONS” video sessions conclude today with the following! Watch yesterday’s video answers here: HAVE I GONE SKINNY DIPPING? And Other “Get to Know Me” Questions Pt 1/2

“Lord of the Rings” or “Game of Thrones?”

Favorite Superhero Ever and Why?

Have I Ever Been In Trouble with the Law?

Have I Ever Dated a Black Guy?

Which Musician Do I Want to Meet the Most?

What’s the One Question I Want to Ask God Most?

What Would I Do if I Won the Lottery?

What is the Girliest Show I Watch?

Where Would I Travel Anywhere in the World?

Which “The Walking Dead” Character Would I Bring Back from the Dead?

As Whom Do I Most Want to Cosplay?

Will I Return to the East Side Dave Show?

MY “GET TO KNOW ME QUESTIONS”/”ASK ME ANYTHING” VIDEO FEATURE IS RELEASED TODAY AND TOMORROW:

Part 2 Here: VIDEO: HAVE I BEEN IN TROUBLE WITH THE LAW? And Other “Get to Know Me” Questions Pt 2/2

Am I a Feminist?

Actor/Actress I Want to Meet the Most?

Would I rather have Captain America’s shield, Green Lantern’s ring, Iron Man’s suit, or Thor’s hammer?

After the Negan/Lucille premiere, is “The Walking Dead” sleeping through the season?

Do I Draw or Write?

I Wrote a Disturbing Screenplay When I was 12

Do I Have Any Unusual Talents?

Have I Played Any Sports?

Do I have Any Phobias?

Did I Have Any Childhood Nicknames?

Have I Ever Gone Skinny-Dipping?

Who Would Win: Wonder Woman or Superman?

A Round-Up of This Week’s Top Stories: 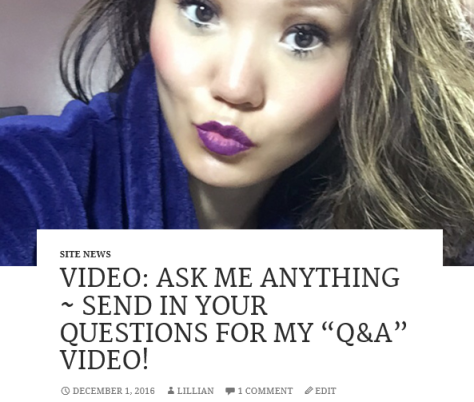 Yesterday, I published I was Grabbed by the Pussy. Literally.

It was a piece that reminded me of why I love storytelling: I love sharing.

So in that spirit and the spirit of Noel, I have decided to do an AMA/ASK ME ANYTHING/Q&A VIDEO! (Thanks to a lovely reader for suggesting the idea in the first place 🙂 ) It will be just like a Reddit AMA… except it won’t be on Reddit… and it won’t be an AMA per se and it won’t be live. The ANYTHING part is true, though! My answers will also all be in video format!  That is, like, so much better than most Reddit AMAs. Sort of.

SEND ALL QUESTIONS TO comments section BELOW or to LILGRIPES@GMAIL.COM

I finally watched “Suicide Squad”… and I caught the acting bug… well, to play one character: Harley Quinn a.k.a. Harleen Frances Quinzel (guess the MD suffix no longer is valid).

Now, all I need is bleach-blonde hair and some pink and blue lowlights.

AND that “Lucky You” tattoo above her… happy place. 😉 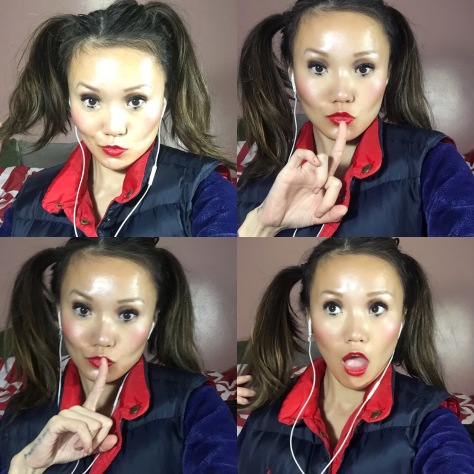 See you next week! Be nice, say sweet nothings, and make out with dogs (Better yet, adopt a dog or kitty cat this holiday season)!

To reward your patience, we got… a four-year late impression of Bane. SUCK IT, TOM HARDY:

OUR 7 FAVORITE THE WALKING DEAD EPISODES SO FAR:

(from 7th best to number one) 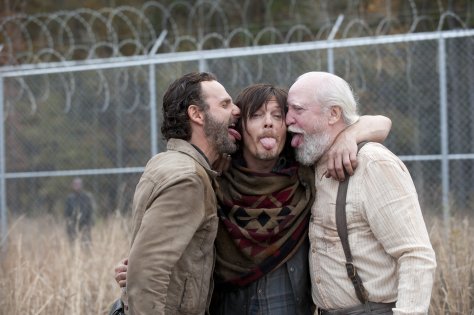 WHAT WE LOVED ABOUT IT:

What a perfect illustration of how some are born to lead and others born to crack. The escalating tension between Rick and Shane, instead of coming to an impasse due to Dale’s devastating death,  had finally shattered the last remaining fragments of their BFF status. Rick (still operating at this point under a democracy than a Ricktatorship) is more assured than ever in the humane choice to set Randall the prisoner free, as Dale would have had it, than to execute him, as Shane would. So, it begins…Shane’s plot to murder Rick in cold blood is revealed to the audience as it is to Rick, making the buildup and the faux goose chase Shane set up all the more tense and rife for Emmy-winning acting moments. (Seriously, did Shane think anyone would buy his story if he walked back onto that farm without Rick?)

It seemed that, as the episode progressed, so did the ferocious pace of Rick Grimes’ ascension to full Alpha status. While Shane was quickly slipping off the cliff of sanity, Rick was firmly holding onto all the hope he saw in front of him: a wife, son, unborn child, and friends both new and old. Andrew Lincoln’s glow-in-the-dark blue eyes, ever-fixated on Shane as the latter kept leading him further out into the woods, carried all of the burden in these dimly lit scenes, reflecting all the flashes of confusion, betrayal, and anger that Rick felt as he followed his former best friend knowingly toward his own execution, thinking, “Is this crazy mothaf***er REALLY going to try and kill me right here and now?”

“People are gonna die. I wish I had something more profound to say…but I’m tired, son. Please, take it.”

-Rick as he hands Carl a gun, the same one Carl later uses to dispatch Walker Shane

WHY THIS EPISODE WORKED:

Shane needed to goooooooo! If you can’t take direct orders from the group’s designated leader, then leave the goddamn group. A group of survivors in a Zombie Apocalypse is simply a microcosmic society and in any society, there must be some order. It was completely satisfying watching him fail to get the upper-hand on Rick, thereby proving Rick’s leadership-worthiness, and even more when Rick’s own son shot him after reanimation. I have watched Carl shoot Walker Shane, like, 100 times on repeat.

P.S. I did cry when Rick frustratingly blubbered over Shane’s dead body: 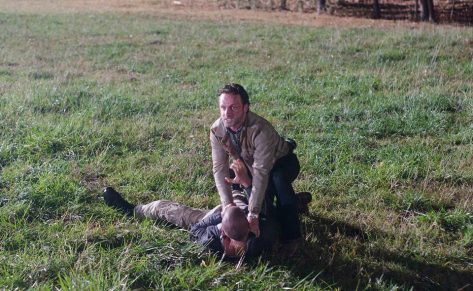 P.P.S. Rick, Carl, Daryl and Glenn witness firsthand the heavy realization that everyone will eventually become a walker.

P.P.P.S. I know she’s dead now, but can someone slap Lori for me? At an emotionally fragile time for all, post-Dale’s funeral, she went over to Shane to have an intimate chat about how her unborn child, whom she had previously declared was husband Rick’s “no matter what,” could just as easily be Shane’s. Given Lori’s knowledge that Shane is already predisposed to rage and possessiveness over her and Carl, that was just complete idiocy on her part. I would blame it on the baby hormones but I don’t want to be labeled a sexist by SJWs.

WHAT WE LOVED ABOUT IT:

Merle, Merle, Merle. Never has a character, up to this point in the series, been so sophisticatedly dissected from start to finish in an episode. Even the always scene-stealing Andrew Lincoln as Rick Grimes paled in comparison to Michael Rooker’s Merle Dixon this time. Rooker enunciated each layer of Merle’s personality clearly and intensely.

We saw Merle the greedy user (“We got any whiskey?” “Just lookin’ for some crystal meth is all”),  Merle the voice of reason (“You’re gonna let [the Governor torture Michonne] all just for a shot? You’re as cold as ice, Officer Friendly”), Merle the dutiful henchman (takes it upon himself to kidnap Michonne and deliver her on Rick’s behalf), and, most tragically, Merle the regretful (dare we say, sorrowful?) loner…The real reason we wound up so saddened by Merle’s departure from this world was that he had resigned to the fact that he didn’t belong anywhere… The Governor no longer wanted him, Rick and his group certainly never liked him, and his own brother, Daryl, now looked at him like a sick old dog whom he just couldn’t bring himself to put down. He had no one left in this world, if he ever had anyone truly… and it took somewhere along his drive with Michonne for him to realize this. 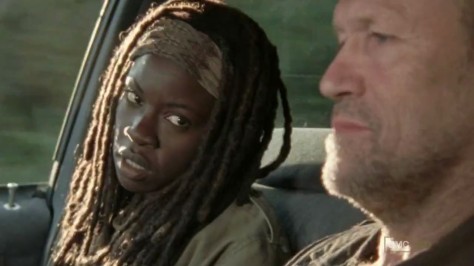 Merle made an ultimately self-sacrificial decision to free Michonne and try to eliminate as much of the threat to Rick’s group as possible. Was it a suicidal decision? Therein lies that beautiful complexity… After having all these layers of Merle Dixon peeled back, we still will never know what truly drove him to do what he did at any given time. Clearly, part of his motivation was the desire to protect Daryl but he chose deliberately to go alone on this killing spree when he could have easily enlisted help. 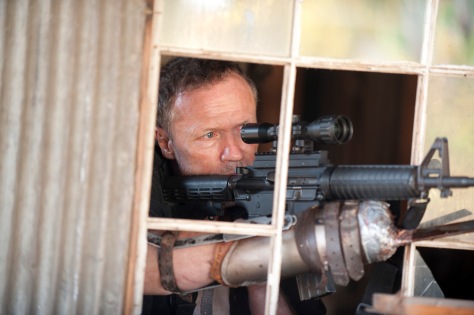 “I can’t go back. Don’t you get that? I just can’t go back.” That, and not his heroic self-sacrifice, was the real tear-jerking moment. Whether he survived his kamikaze-style attack on the Governor’s soldiers, Merle was always going out alone in this world. He knew it. We knew it. For a character who’s been only on a dozen episodes, Merle Dixon’s loss is still felt today as our group faces an entirely new (and bigger) threat in Negan and his Saviors.

Oh, and don’t get us started on Daryl’s cry-face. When Norman Reedus cries, we cry, y’all:

Honorable Mentions for LINE OF THE EPISODE:

In addition to the emotional weight of the episode, Merle helped serve up a delicious platter of one-liners to offset the mood:

“Do you even possess a pair of balls, little brother? If so…they belong to you?”

MICHONNE: “So is this your thing then? Taking out the trash?”
MERLE: “Aww, don’t be so hard on yourself, darling.”

“You’ve got to play the hand you’re dealt… and I’ve only got one.” 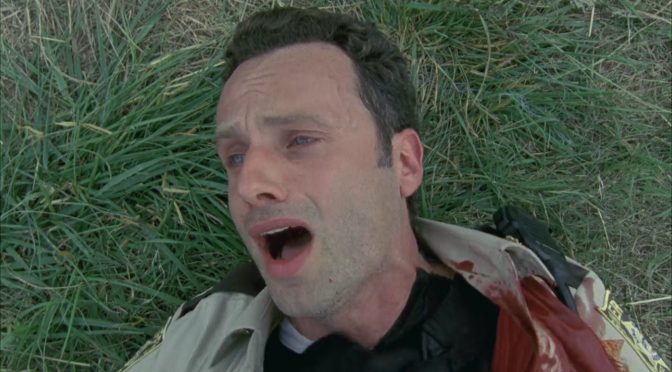 SEASON 6 of “The Walking Dead” has been released on Netflix today. How apropos, considering there is a little less than 6 weeks left ’til Season 7 premieres on AMC… and we find out which beloved main character(s) died at Negan’s bat.

Before the end, however, let’s retreat to the beginning… where it all started, with our #6 Best Episode of All-Time:

Highlight #6: RICK IS ANY ONE OF US

Highlight #5: LINE OF THE EPISODE

“Take a moment. Look at how sharp it is. If you try anything, I will kill you with it. Don’t think I won’t.”

We saw an older Flash played by John Wesley Shipp on last season’s The Flash finale. That made me wonder: Would an older speedster like a 70 year-old Jay Garrick be necessarily slower and/or weaker than a 25 year-old Barry Allen?

Do speedsters age? Obviously, they do in the Greg Berlanti DC-verse because John Wesley Shipp was meant to look his age–a very handsome 61! If so, how much slower than normal humans do speedsters age, if they age differently at all?

Captain America is just a regular human being at the peak of human regenerative, athletic, and physical capabilities. Causal movie-goers may not know this very important detail but he is, in fact, not a “super”-hero, not technically. So yes, Cap CAN get super-super chunky if he chose to give up crime-fighting and just binge Netflix for a living while exclusively eating Chipotle for the rest of his life.

The question is: How long would that take?

“How long would it take Captain America to acquire a Dad Body?”

Which pop and/or movie stars do you think survived the Walker Apocalypse in the universe of “The Walking Dead?”

When I say “stars,” I don’t mean celebrities like Bear Grylls or Dave Salmoni. I mean specifically singers and actors like Beyoncé, Eminem, Tom Cruise, and Jamie Foxx. The artists.

Still, let’s keep in mind that a lot of these superstars came from humble and often-rough beginnings. It might not take as long for them to revert back to basic survivalist instincts as you would think for someone with so-called “champagne problems.”