WHEN I WAS 9 YEARS OLD, I became obsessed with McDonalds. One problem was that I hated the cheese that came with their burgers. “I’ll just have hamburgers for the rest of my life,” I thought. Except my 9 year-old self had a sneaking suspicion that this meant something far, far worse than me simply eating cheese. A terror steadily crept over me with each subsequent ham–not-cheese–burger order that I placed there: I was growing concerned that I would never recover from this fear of cheese and much. much worse…that something was horribly wrong with me. My fear of cheese was unnatural and unacceptable and would actually lead to my finally being shunned from society one day. I was the one with the problem, was the conclusion to which my 9 year-old self had jumped. From then on, I operated under the assumption that of all the toys in the children factory, I had come off the shelf with an inherent defect.

Skip forward or backward a few years, I was in gym class, changing for the first of several grade-school tennis lessons. All students had been instructed to wear white sneakers. Simple enough, right? Then, I quickly observed that while everyone else’s were traditional white lace-up Nikes, my sneakers were completely lace-less Keds (Who knows if they were actually Keds? I was a kid, for God’s sake–didn’t know where my shoes came from). So, as class progressed, my shoulders sloped further and further downward ’til I was just staring at my feet with the embarrassingly wrong white sneakers my mom had thoughtlessly purchased. Eventually, I made my way back to the locker room, eager to slip out of my white nightmares.

“Cute shoes!” Exclaimed one of my classmates.

“HUH” was my appropriately dumbfounded reply.

“Where did you get them? I really want a pair just like those! I hate these boring ones.” 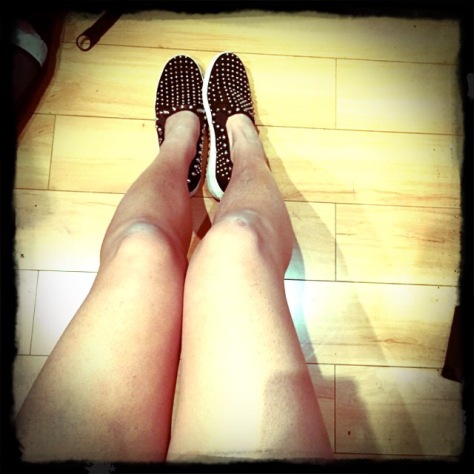 Not quite white Keds, but let’s say I feel better about my shoe choices these days…

About 20 years later, some few weeks ago from composing this blog entry, I connected these 2 completely isolated and seemingly insignificant incidents. The fear of cheese meant that I would be a social pariah forever. The non-Nikeness of my gym shoes meant that my whole family had terrible taste in shoes and that we basically couldn’t do anything right. On both occasions, I had jumped from point A to point D, point D being a place of utter and complete self-defeating delusion. Just because something was mine meant that it sucked.

I have always underestimated myself. Not that who I actually am is likely any greater than whom I have underestimated myself to be. I have just always been afraid to be myself, to be an original… Because I live with the constant fear that “myself” has never been and will never be quite good enough.

That’s why I have always attempted to copy what others ate, what others wore, the mannerisms with which they spoke, the facial expressions they have when they experience a particular emotion… Yes, it sounds totally “Single White (Asian?) Female,” but the truth is tragically less salacious–I have simply been afraid to be who I am and own what I own, lace-less sneakers and whatnot.

Well, welcome to the chronicles of the rebuilding of a woman from the ground-up. The Lillian Project, if you will. (Oh yeah, if you don’t like Mindy Kaling and/or “The Mindy Project,” you should just stop reading. And probably stop living)

Endnote: The last time I used a blog for personal reasons was chronicling my deep well of teen angst during HS years on Xanga …You guys remember Xanga. It was BlogSpot before it was Myspace before it was Facebook…before it was Tumblr and WordPress.

I hope you stick around, my lovely readers. I promise I’ll try to entertain.