CAN YOU SAY DOPPLE…GANGER ONE MORE TIME? These last two weeks of The CW’s “The Flash” saw our titular speedy hero (Grant Gustin) and two friends travel to a mirrored dimension filled with people who look, sound, and move exactly like them, except they lead completely different lives. An alternate reality in other words.

The trip’s goal was noble, of course–to save a young girl from the demonic clutches of an evil speedster named Zoom significantly faster than Barry Allen of Earth 1 (Barry-1)/The Flash. But that’s besides the point. We viewers really went along with them on this multiverse journey to see all the trippy DC Easter eggs–people and events–that another “Earth” had in store for us… and DC did not disappoint. A world rife with doppelgangers awaited us and here were my reactions and thoughts as I watched along:

5:30 As Barry, Dr. Harrison Wells (the marvelous Tom Cavanagh) whose daughter is said captured girl and their tech-geek pal/newly minted superhero with the ability to permeate the vibrations of the universe (an explanation of “Vibe”‘s powers here), Cisco Ramon (Carlos Valdes), are speeding through the portal to the other dimension, they see objects and people in existence at all instances throughout time–in the past, present and mostly the future.

Easter Egg #1: The Green Arrow, in either a future or alternate-reality version 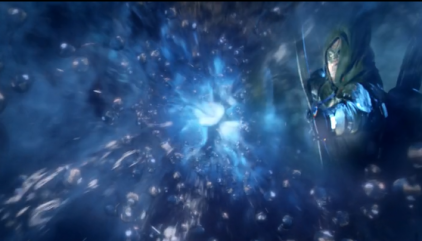 #2: 90s Flash! John Wesley Shipp (who beautifully portrays Henry Allen, Barry’s dad, on this show) is shown as the Flash on his 90s vehicle 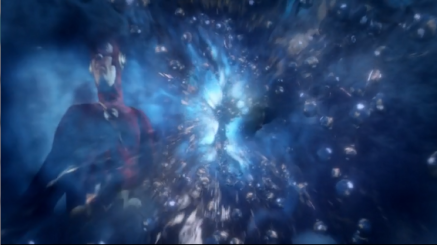 #3: Supergirl! The current live-action iteration of her anyways, as played by Melissa Benoist on CBS. My not-so-great feelings on that show. 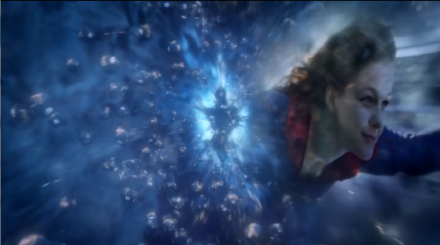 #5: WHO IS THIS MAN IN A FEDORA HOLDING A DERRINGER? HELP, YOU GUYS?

#6: A ring… Green Lantern’s ring? (UPDATE: Thanks, @Kevslider on Twitter, I had a total brain fart– THIS is Barry’s ring from the Legion of Superheroes!)

6:43 I LOVE that Barry and Cisco act like two eager tourists the moment they arrive on Earth-2:

9:13 Laughing out loud at Cisco’s bravado:

“Alright, Zoom, you can run but you can’t hide,” as he slickly slides on a pair of power-enhancing frames to search for Zoom. 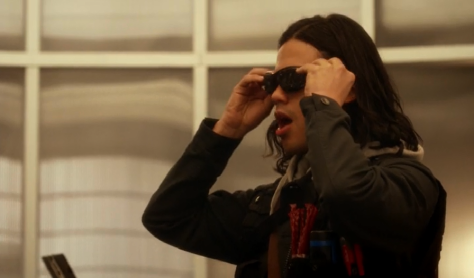 …Nothing for a good few seconds…

“You know what, you guys are crowding my space. I can’t perform like this under pressure. If you can back up a little…”

…Wells and Barry dutifully back up. 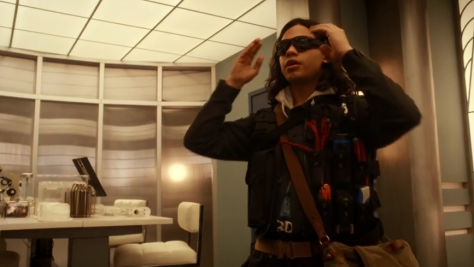 11:30 I love that Cisco packed TWIZZLERS in his utility vest:

12:00 Having kidnapped Barry-2 and temporarily taking his place as a CSI to suss out the sitch.. Barry-1 sees, at the Earth-2 Central City Police Department:

AT THIS POINT, I MUST make a note about the almost-anachronistic fashions of Earth-2. This is apparently an alternate reality in which science and technology are advanced almost a century ahead of Earth-1. Yet, 20-something year old men wear tweed, female police detectives wear high-waisted bell-bottoms, and fedoras bounce atop domes everywhere. Who decided that this would be the sartorial look for Earth-2? I’m not complaining but it is curious how it clashes with the technology of the times. 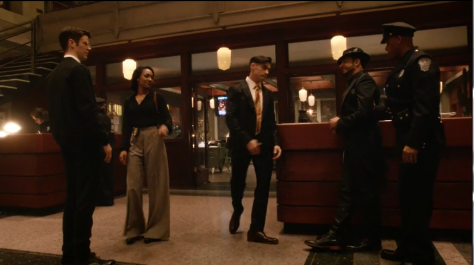 13:50 Enter Killer Frost a.k.a. Earth-2 Caitlin Snow  (Danielle Panabaker). From the moment you hear her echo-y voice deliver an evil monologue and then take in her leather-clad vixen look in full, you fall under her particularly icy spell. Every note of her performance (CLAP CLAP, DANIELLE) is perfection.

The blue lips, platinum blonde mane, and all-leather ensemble suit her cold-blooded (humor me, please) persona down to the last cube in the ice tray (okay, I’m done). Killer Frost, however, may not be as one-dimensional a villain as viewers would expect.

The first hint of her possible hidden warmth is felt through her love connection to Ronnie Raymond a.k.a. Deathstorm on Earth-2, a villain who blasts nuclear energy at people. Even Killer Frost’s one-liners are not as one-toned as they usually are with Villains of the Week. She seems genuinely damaged and unfortunately twisted into who she became.

Every crack in Killer Frost’s broken person sheds human light upon her soul… I enjoy Panabaker a lot more as Frost than as a goody two shoes MD on Earth-1.

15:38 Iris West-Allen undressing in front of Barry-1 causes him to look away like he’s suddenly disgusted by the sight of female breasts… Just good ol’ Barry being respectful to a woman who doesn’t know he’s impersonating her husband.

16:35 Barry speaking to his mom = MUCHO TEARS ON MY END. Learning that she’s not only alive on this Earth but happy and healthy…Waterworks.

18:57 Joe (Jesse L. Martin) as a pro lounge singer! Wow, is Jesse L. Martin a smooth vocalist! Bad news… Barry and Joe are not loving foster son and dad on Earth-2 but “Bartholomew” and “Joseph” to each other…A hostile son-and-father-in-law relationship there. 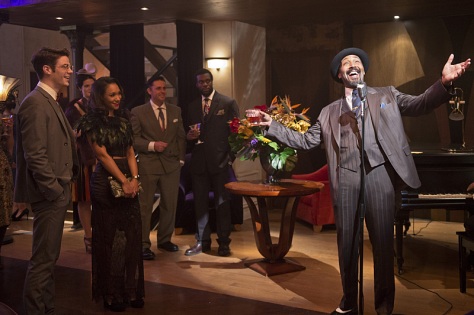 EVERY DAMN TIME JOE CALLED BARRY “BARTHOLOMEW,” I PRETTY MUCH PEED MYSELF.

22:05 Back on Earth-1, Jay Garrick confessed yet another shady side to his increasing lack of character– Zoom didn’t steal his powers; he lost them by being greedy and experimenting on himself so he can get more speed.

THIS GUY GETS FISHIER AND FISHIER WITH EACH APPEARANCE. SWIM, SWIM, MY LI’L FISHY!

26:00 “God, this is making me so hot!” -Killer Frost watching Deathstorm try to blast the Flash.

30:00 Why am I crying at a fake Joe West’s death? I hate this show’s ability to manipulate feels.

32:21 TOTAL CLARK KENT MOMENT! BARRY, WHO OTHERWISE NEVER GETS THE OPPORTUNITY, GOT TO WHIP OFF HIS GLASSES BEFORE SUPERHEROICS.

33:00 Talk about the dull Villain of the Week. Geomancer… easily the worst thing about this 2-part series. “Get ready to rumble.” Yes, we get it. You make the earth quake. Blah blah, see you in cuffs soon.

36:20 Of course, Cisco-2 is evil and shares Cisco’s powers–he’s just way more advanced in exercising them.

37:20 “Are you Cloud City-Vadering me right now?” -Cisco-1 after his counterpart offers to split the Earth-2 empire with him.

38:30 Love “Deadshot” missing each and every attempt at shooting Cisco-2 at close range.

39:20 For a guy who can run about 10x faster than the Flash, Zoom talks at a painfully slow pace. Like, dude, are you like Bane and severely injured around your mouth area or something?

40:01 A twinge of sympathy for Killer Frost as she weeps over Evil Ronnie’s dead body, courtesy of Zoom.

40:40 As Caitlin and Jay discuss his condition and the possibility of their friends being stuck on Earth-2 forever, I’m beginning to suspect Jay has a terrible ulterior motive. Call it an inkling. 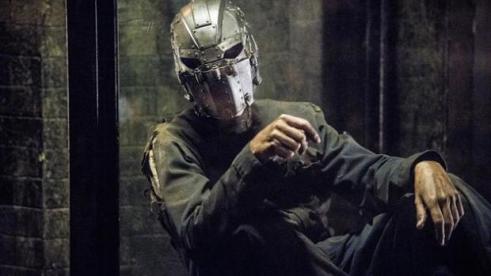 (the superior episode of the 2-parter IMO)

2:20 CAN SOMEONE KILL ZOOM ALREADY SO I DON’T HAVE TO EVER HEAR HIM HOARSELY WHISPER AGAIN IN THAT QUASI-BRITISH ACCENT?

3:30 Barry-2, still kidnapped and locked in a room by Wells and Cisco, is…delightful.

“Hello??? Whoever’s responsible for this…Ohh, we are going to have words, the two of us!”

Now, Barry-1’s no smooth operator but Gustin does an amazing job further differentiating between an awkward-but-superpowered Barry and an awkward-and-super-awkward Barry.

7:00 The mute and masked Gimp won’t stop tapping, attempting to send the captured Barry-1 a message.

I SAY THE GIMP’S PERCENTAGE CHANCES OF BEING SOMEONE THEY ALL KNOW (OR THINK THEY DO) ARE AT WELL OVER 90.

8:02 Jay CONSTANTLY is breach-fixing, making everyone think he’s the one screwing with the breaches. Maybe he is really a good guy, but he definitely has more nasty skeletons in his closet to share.

9:30 Scott Evans? A pretty-boy editor for Iris on Earth-1… Smells like a love interest for her (before she meets her inevitable destiny and marries Barry) to me.

12:25 “Patty Spivot is pretty… thorough in her metahuman logs.” – Earth-2 Barry, the pause indicating a whimsical wink at Barry and Patty’s former romance on Earth-1.

12:30 Barry-2’s lab looks identical to his on Earth-1. Guess they ran out of prop and CGI money to upgrade the look of his man-cave.

15:54 “Velocity 9” for Jay–All this emphasis on the advancement of speed drugs for Jay just makes me more and more nervous that his story is heading down a sinister path.

18:00 My favorite SFX on any speedster is when his eyes crackle with lightning: 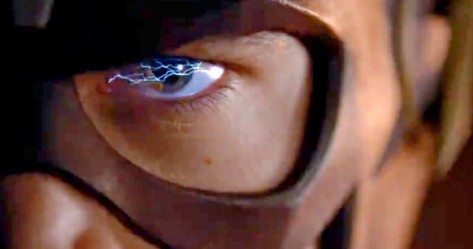 18:35 SOMETHING TELLS US JAY WASN’T NAPPING DOWNSTAIRS LIKE HE TOLD CAITLIN…

19:02 And now the Gimp is tapping to tell Barry-1 something about Jay.

A LOT OF FAN THEORIES SWARM THE GIMP’S IDENTITY SO I’LL JUST SPELL OUT THE FACTS AND THE FACTS ALONE:

So… keep speculating. This is quite the entangled mystery. Bravo, showrunners.

21:22 Killer Frost continues her dance with her good, bad and neutral sides throughout these two episodes. As Cisco-1 reminds her, they now have a common enemy in Zoom. Yet, she seems both afraid of Zoom and a naturally loyal follower.

A question about Killer Frost’s powers: She throws apparently deadly icicles through people’s chests. HOW DEADLY are icicles in real life when aimed at most places on the human body? Is it the speed at which she propels them?

28:53 “Caitlin, so sorry I didn’t come sooner.” – Jay… OH, you mean “sooner” as in when I almost died in a crazy, loud-ass fight with Geomancer while you were a mere floor below supposedly napping?

I DO NOT TRUST JAY GARRICK!

33:06 Barry’s speech to Barry motivating him to get fast enough to phase through his prison walls was this episode’s “Barry-1 talking to mom.”

35:60 Gimp looks very happy when Barry escapes from Zoom and encouraged him to leave him behind for the time being for Barry’s sake. Sounds like the Gimp is a hero to me.

40:24 HOORAY! Dr. Wells, and therefore, Tom Cavanagh, is going back for good to Earth-1. I’m not prepared to lose Tom as a series regular.

40:42 Jay conveniently stands in front of the last closing portal to Earth-2 just long enough for Zoom to stick his claws through Jay’s chest and pull him back to the other dimension. Something tells me that’s what Jay wanted all along…

WHO IS THE MAN IN THE MASK (WHOM I HAVE BEEN CHEEKILY CALLING THE GIMP AND FOR THAT, I AM SORRY, SIR)?

WHAT IS JAY AFTER? IS HE REALLY JAY GARRICK?

HOW DOES ZOOM POSE A THREAT TO TEAM FLASH NOW THAT THEY HAVE SUPPOSEDLY CLOSED ALL THE PORTALS BETWEEN THE TWO EARTHS?