I KNEW LITTLE ABOUT MELISSA BENOIST (previously most known for “Glee”) when I heard through the Twittersphere that they had cast the titular superheroine for CBS’s new “Supergirl” series. [Supergirl, briefly, is an alien originated from the planet Krypton and a cousin of Superman’s. Their real names, respectively, are Kara and Kal-El. On Earth, they are known as Kara and Clark Kent. What makes them super? Extraordinary strength, speed, invincibility as well as X-Ray vision, supersonic hearing, and flight (NERDS… Got a problem with my necessarily hastened description here- WRITE YOUR OWN DAMN BLOG. K?)] As a big fan of females kicking butt, I was so amped to find out who it was and what she looked like. I found out she looked like this: 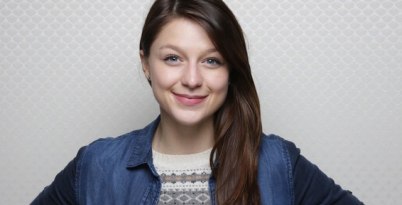 I am so confused. Ms. Benoist is a pleasant-looking girl. She looks perfect for the role of a baker’s granddaughter or the girl next door’s…best friend. She is not Supergirl. She’s not even Supergirl’s best friend. Look, I am ALL for the “average girl” scoring leading film or TV roles. Absolutely… for any range of comedies from “Chasing Amy” to “Bridesmaids” or dramas like “August: Osage County.” *I am actually not insinuating any of the women in these films were “average.* Melissa Benoist simply does not belong in superhero roles. Here’s why:

1.  She is a first cousin of Superman’s.

Now, I’ve known quite a few first cousins to look nothing alike, but for the sake of storytelling, it would serve the CBS show well for Kara and Clark to exemplify some shared and attractive DNA in their faces. That means she needs to bear at least a passing resemblance to Henry Cavill, Tom Welling, Brandon Routh, Dean Cain, and/or Christopher Reeves. Or some type of composite image of those five Supermen.

[Melissa] Benoist is a pleasant-looking girl. She looks perfect for the role of a baker’s granddaughter or the girl’s next door’s…best friend.

2. She is a superhero. Superheroes have exceptional features. Melissa’s face, while pretty, is forgettable. I saw a picture of her face a second ago typing this and I’ve already forgotten what it looks like.

“Exceptional” does not have to mean “exceptionally good-looking.” Not all superheroes need chiseled Greek god jawlines à la Superman, Batman, or Captain America. But every rendition of Spiderman requires exceptionally boyish features and every version of the X-Man Blob needs to have…blob.

In other words, superheroes need to stand out in some shape or form, be it a beauteous or a lard-filled one.

3. She will be directly compared to two significantly more memorable, now-iconic superheroines. The last Supergirl to appear on live-action television was the extremely comely “Smallville”‘s Laura Vandervoort. Ms. Vandervoort’s Kara was all acute glares and cheekbones from the outside and sassy thorns and quiet fortitude within. Her stubborn brattitude made her Supergirl the perfect foil to Superman’s boy-scout altruism.

Then there’s 1984’s cheesetastically-awesome-in-retrospect “Supergirl” movie. While the movie was widely panned by critics and viewers alike at the time, the casting of Kara Kent had nothing to do with it. Helen Slater’s broad, Amazonian shoulders and piercing glaze were born to inhabit this role.

In fact, Slater actually looks more suited for the role in her finer age than Benoist does:

Then again, this IS CBS [As of mid-2016, the show has joined its DC sister shows on the CW]. They target an older demographic whom they don’t want the presence of a Victoria’s Secret model to threaten and who, frankly, probably wish they could only look like Melissa Benoist. Let’s just wait for the first episode and see, shall we?

8 thoughts on “TV: Griping About the Miscast of “Supergirl” (Based solely on a trailer and some promo pics)”